Series: The Intelligence-Led Approach in Action

In October 2021, the International Consortium of Investigative Journalists (ICIJ) released the Pandora Papers, a leak of 11.9 million documents with 2.9 terabytes of data. This data, which details the secret wealth and use of tax havens by prominent global figures, is an astonishing feat of journalism and provides numerous avenues to be explored. In many cases, financial institutions and other organisations will need to examine their exposure to risk as a result of new information in the Pandora Papers.

However, much of it is difficult to understand without network mapping and visualisation. This article will show how a tool like Videris, which is focussed on using open source intelligence to support an intelligence-led, network-centric approach to investigations, can help us to exploit a dataset such as the Pandora Papers in a matter of minutes.

For demonstrative purposes, we’re going to start with an article1 that discusses a prominent Belgian businessman, Bernard de Laguiche, and his connections to Solvay, a chemical company. Solvay has been accused of knowingly polluting the Italian town of Spinetta Marengo with substances known to cause cancer through one of its chemical factories. We’re going to try to understand de Laguiche’s corporate footprint and risk profile.

To begin an investigation, the key entities that are present in this article are added to our chart. In this case, that’s de Laguiche and Solvay SA. 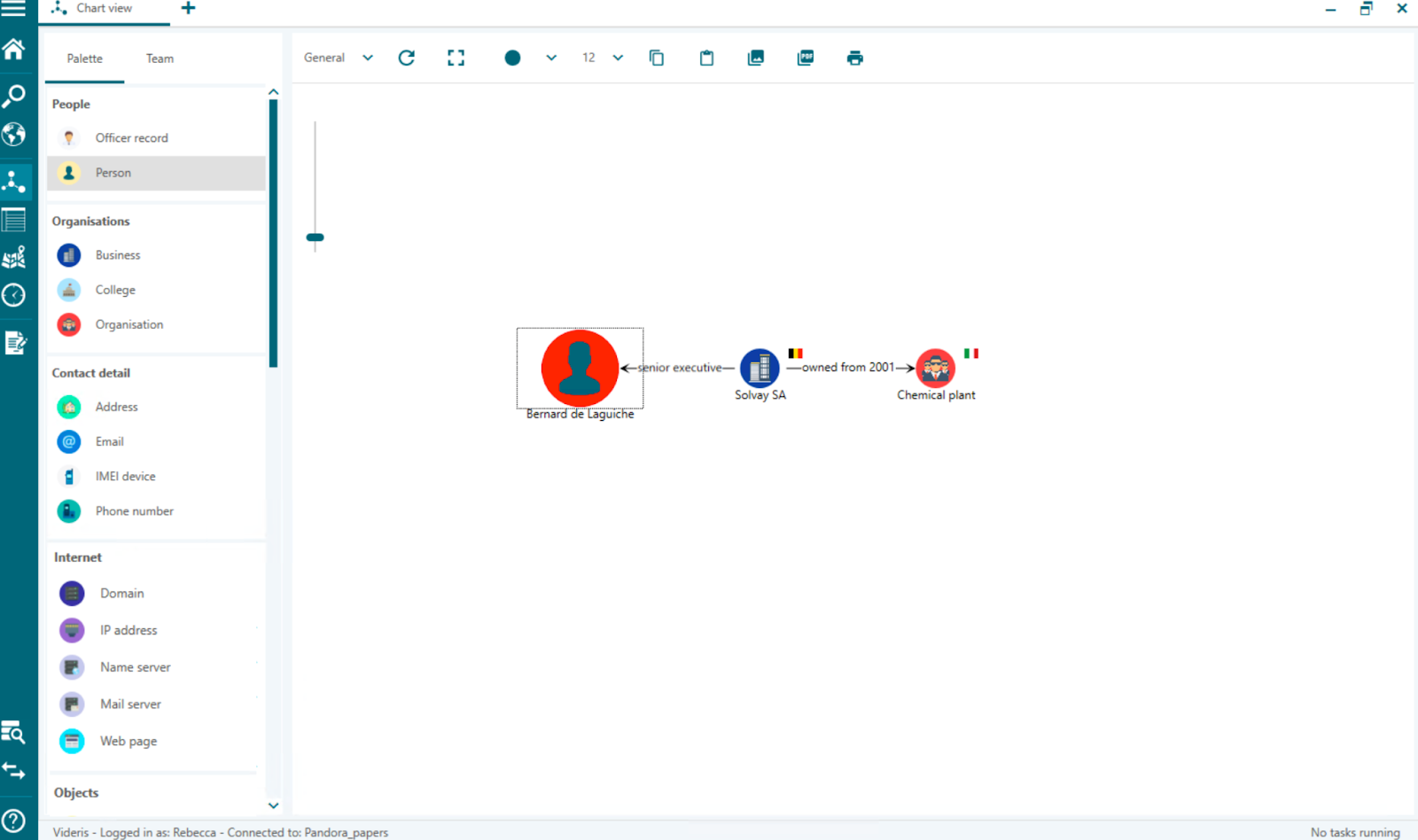 Adding as much contextual information as possible to Videris is important because the platform uses this context to help the investigator identify the most relevant information later.

Mapping out a corporate network

Once the starting information has been added, it’s possible to explore the corporate records of de Laguiche. Videris brings back 13 results from various, integrated providers of global corporate records, but one contains a large amount of yellow highlighting. This suggests that this is the most relevant option because it contains known intelligence from information already in the operation. 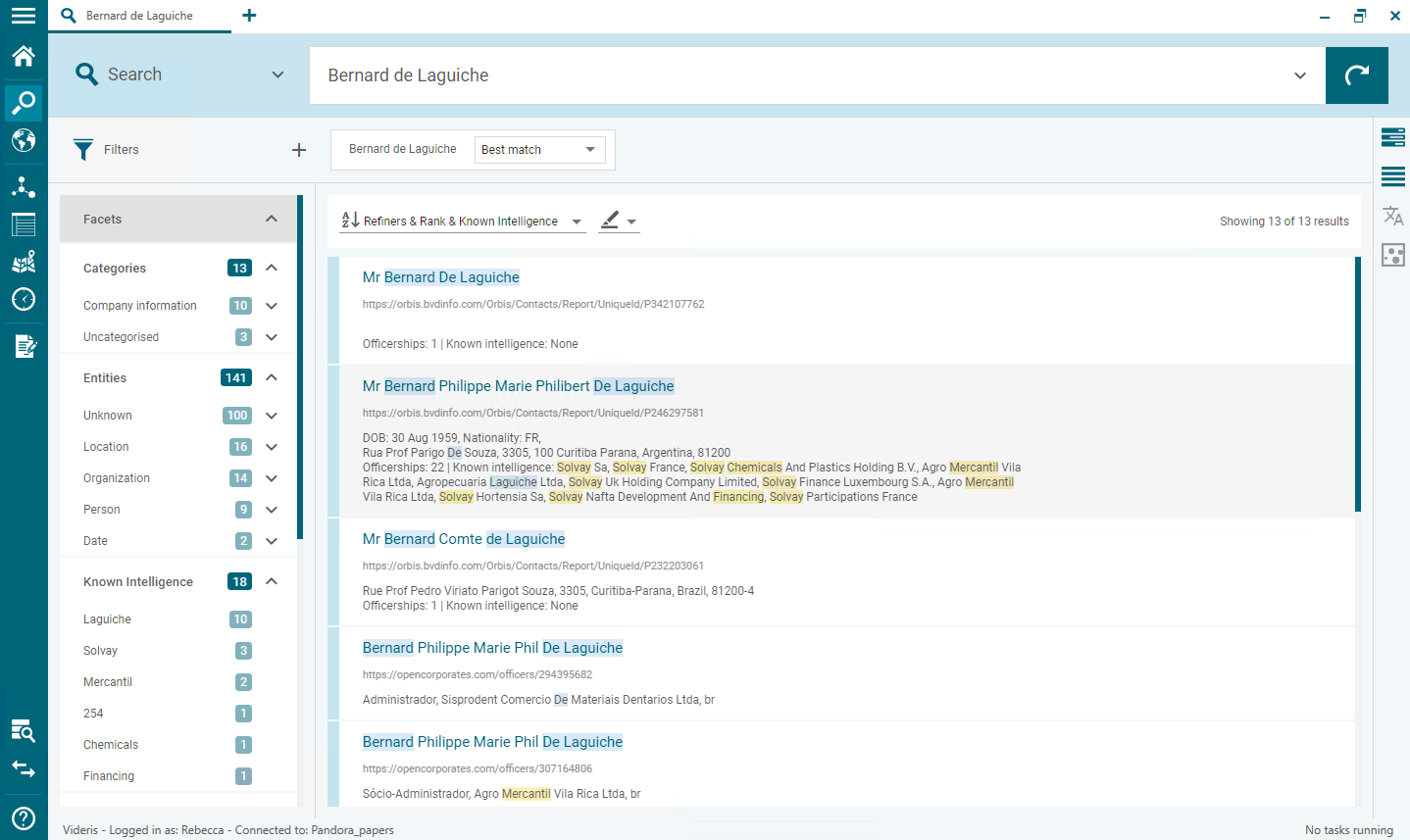 In order to start mapping out de Laguiche’s corporate network, we paste it into the chart and right click to bring back all of the data connected to the record. 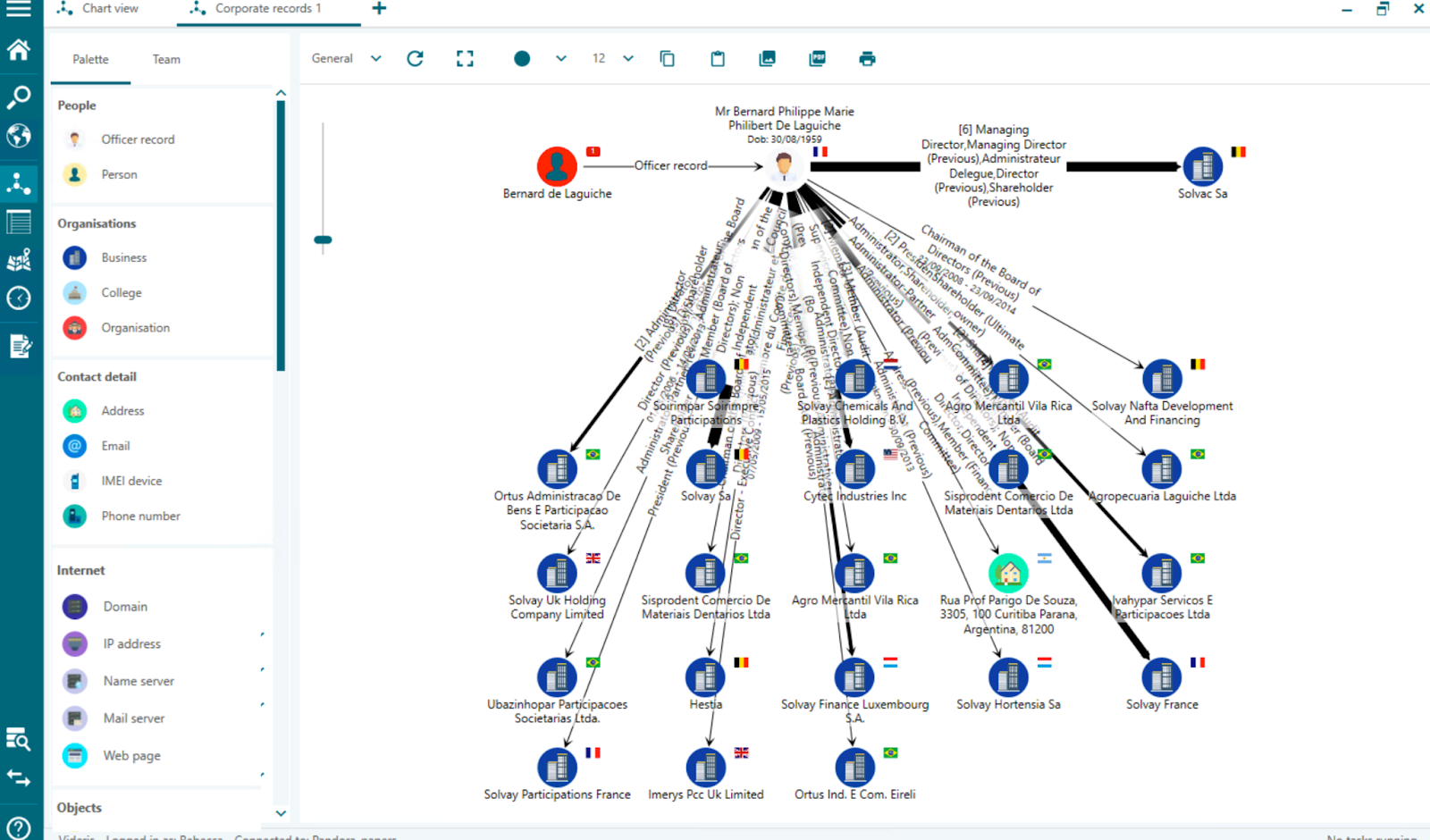 We quickly see that de Laguiche is connected to a large number of ‘Solvay’ companies. The thickness of the lines here represents the strength of his connections to each organisation. We can pull in more information about the companies de Laguiche is strongly connected to in just a few clicks. These include a company called ‘Solvac’, cited in the article as the largest shareholder in Solvay.

When we look more closely at Solvac, it is evident that de Laguiche has held a very large number of positions at the company, and that a possible relative of his has also held an honorary position there. This reinforces the argument that de Laguiche holds significant responsibility for Solvay’s actions, including its role in polluting the town of Spinetta Marengo. 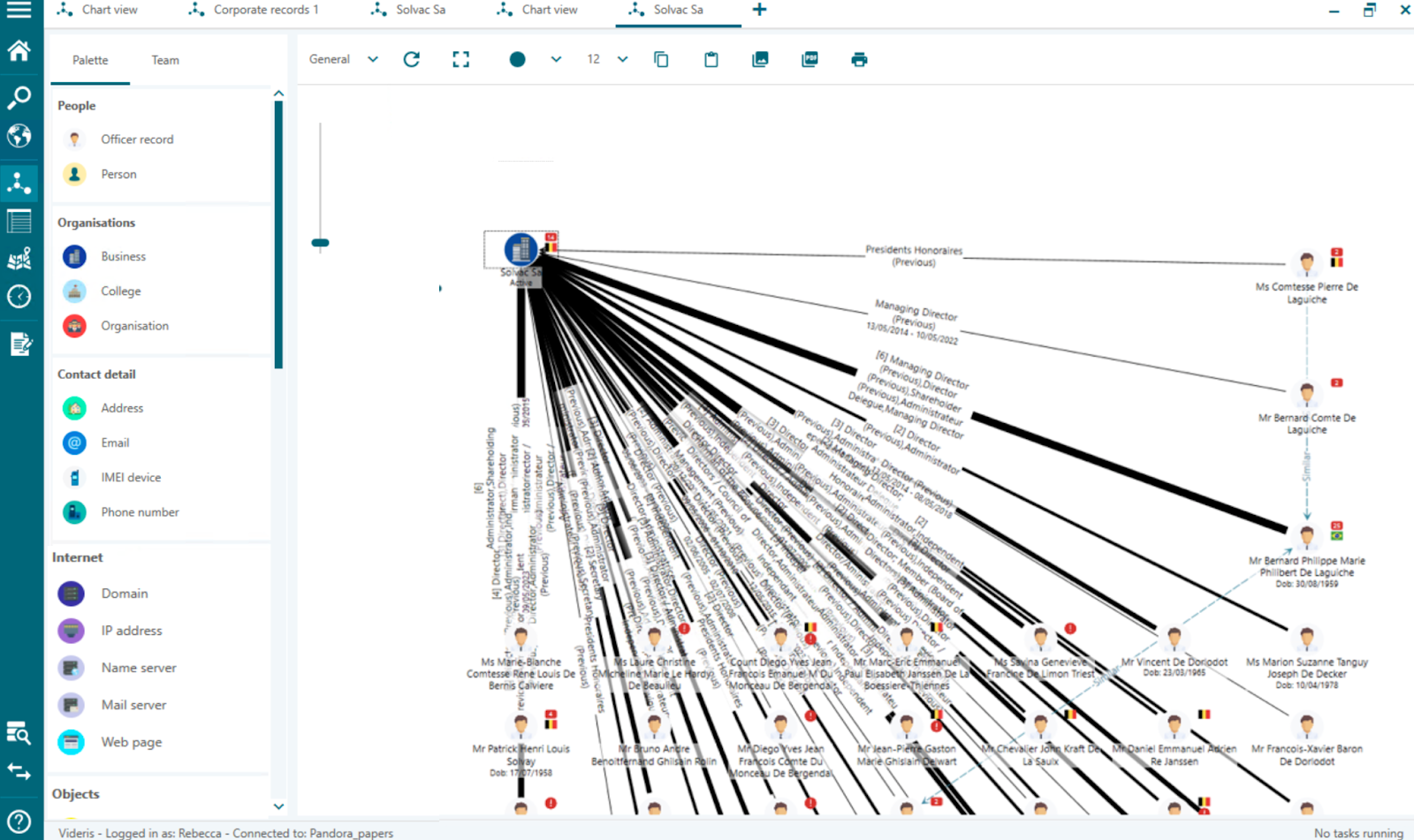 Furthermore, a large number of the directors associated with Solvac – and by extension de Laguiche – are flagged (using red exclamation marks) as having possible associated risk. At a glance, we can see that de Laguiche is likely to have a high level of exposure to risk. 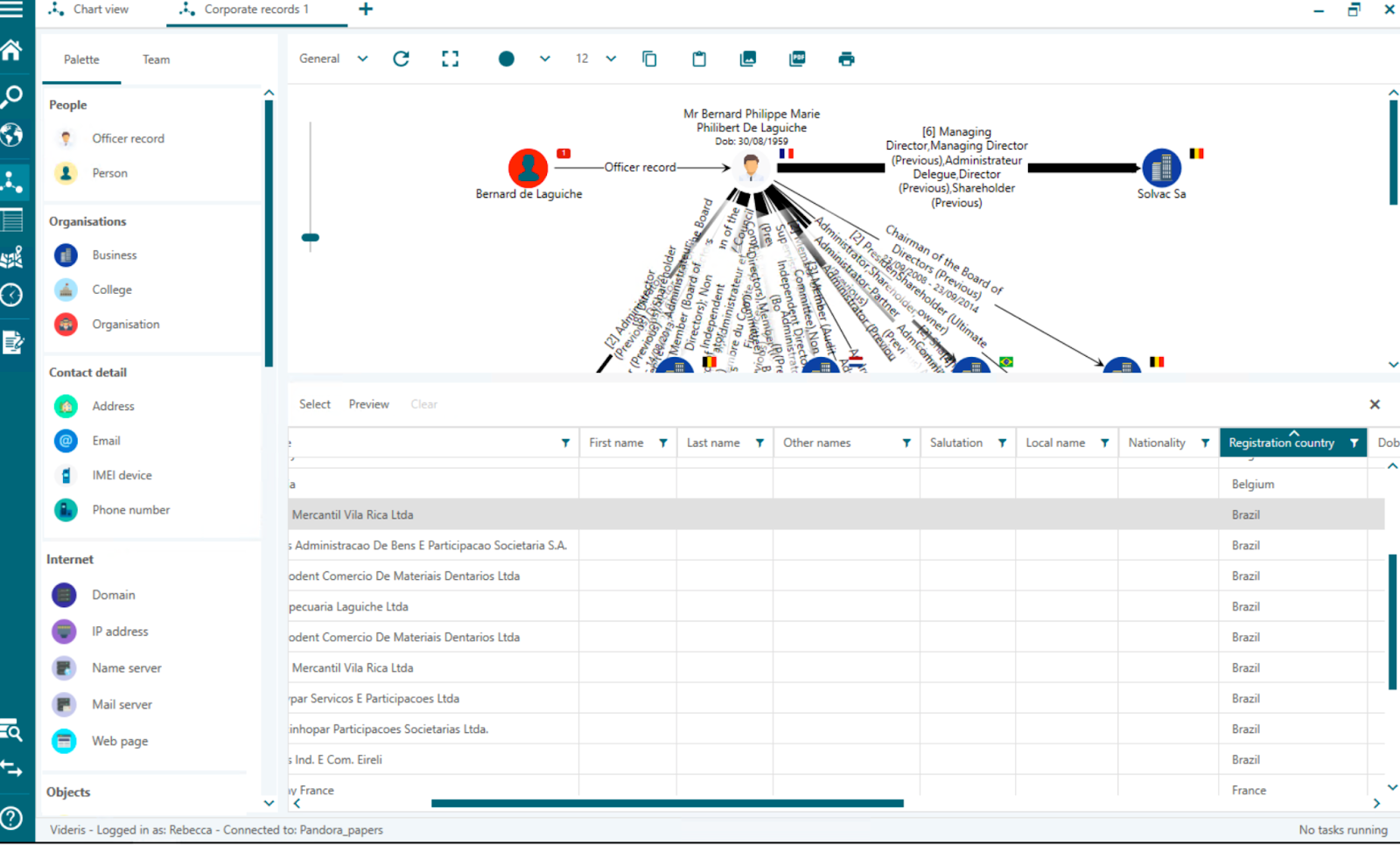 As de Laguiche has a large corporate footprint, we may want to view just some of his directorships at one time – for example, all of the companies that are based in Brazil. It’s simple to do this by filtering the chart by company nationality.

From this, we can quickly understand that de Laguiche has a role in several agricultural businesses in Brazil in addition to his Solvay directorships.

If we want to find out more about why de Laguiche has so many interests in Brazil, we might carry out an internet search to try and understand this better. Videris allows the investigator to carry out a cross-search between two terms (in this case, ‘de Laguiche’ and ‘Brazil’) to target the results we are most interested in across a number of sources, including search engines and premium news sources.

Using this search, we quickly find out that de Laguiche stood down from Solvay in 2013 in order to pursue personal business interests in Brazil.

In this case, we are already aware of the risk surrounding de Laguiche and Solvay’s involvement in poisoning water. However, when we filter these results for risk-related content we are also able to identify more obscure results concerning Solvay’s activities in Brazil – in particular, the accusation that Solvay has history of accusations of cartel activity in Brazil. These results would ordinarily be hard to find – they are unlikely to be on the first or second page of Google – but Videris’ filters make it easy to identify content of interest regardless of where it is in search results. 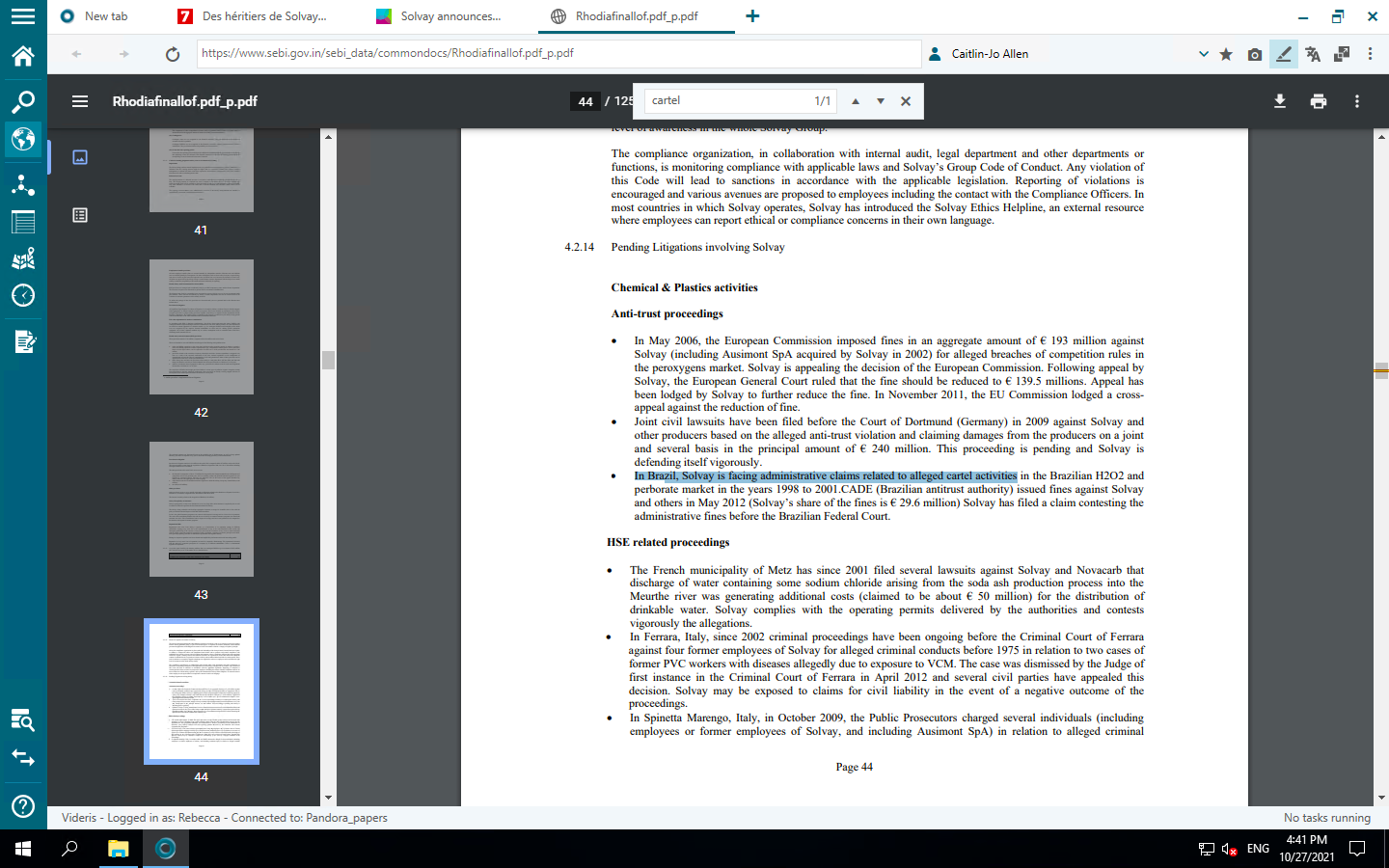 Quickly understanding a subject of interest

Using Videris, we have gained a good understanding of de Laguiche’s interests and risk profile in a far shorter time than would ordinarily be possible:

Ultimately, Videris has helped the investigator to quickly understand the strength of de Laguiche’s involvement in Solvay and to verify some of the information that has come to light through the Pandora Papers. If you’re interested in how Videris can help you to understand your exposure to risk, get in touch.