Mapping sanctioned entities and their networks with Videris In this case study, we’re going to take a look at how Videris can help investigators to map a sanctioned entity and identify their network in just a few clicks.

Kirill Shamalov is closely linked to President Putin and the Russian administration. Not only was he previously married to Putin’s daughter (Katerina Tikhonova), he has held shares in a major Russian oil and petrochemicals provider, Sibur and is a former economic advisor to the Russian government. Sanctions have been imposed on Shamalov because of his role in the energy industry and because he is considered to be a close associate of Putin.

As an investigator, we need to:

To understand Shamalov’s corporate footprint, we first start with all of the data we have about Shamalov, including his name and date of birth. Videris will use this information  (“known intelligence”) throughout the investigation to show us data that’s most relevant to our investigation.

Suggested reading: Read our article on Going Beyond Watchlists, to find out more about the benefits of an intelligence-led approach to managing sanctions risks.

Now we can search for any officer or director positions Shamalov holds using Videris’ global corporate records integrations. We are able to do this in just a few clicks and pull back all information that is available in regard to Shamalov’s global corporate connections. 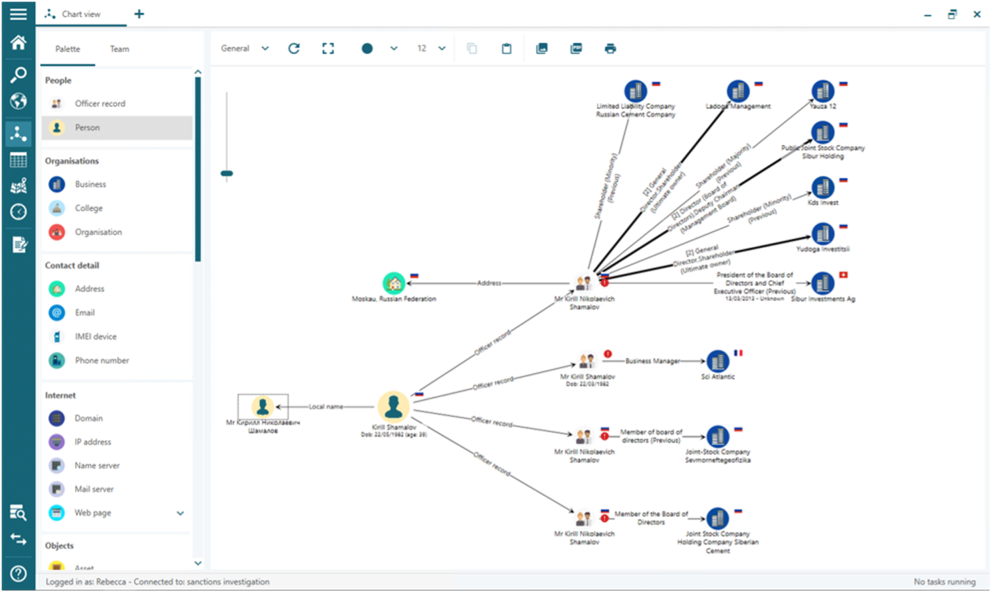 Most of the entities Shamalov is connected to are, as expected, Russian oil and petrochemicals companies, with the exception of a Swiss investment company which is clearly connected to the ‘Sibur’ family of companies. However, he also appears to be connected as a ‘business manager’ to a single French entity called Sci Atlantic, which is not in keeping with the rest of his corporate footprint.

With a single click, we can view other directors connected to Sci Atlantic. We can see that a number of previous directors with Russian names have been identified, as well as a phone number and address in Biarritz, France. There is little information as to what this entity might be. 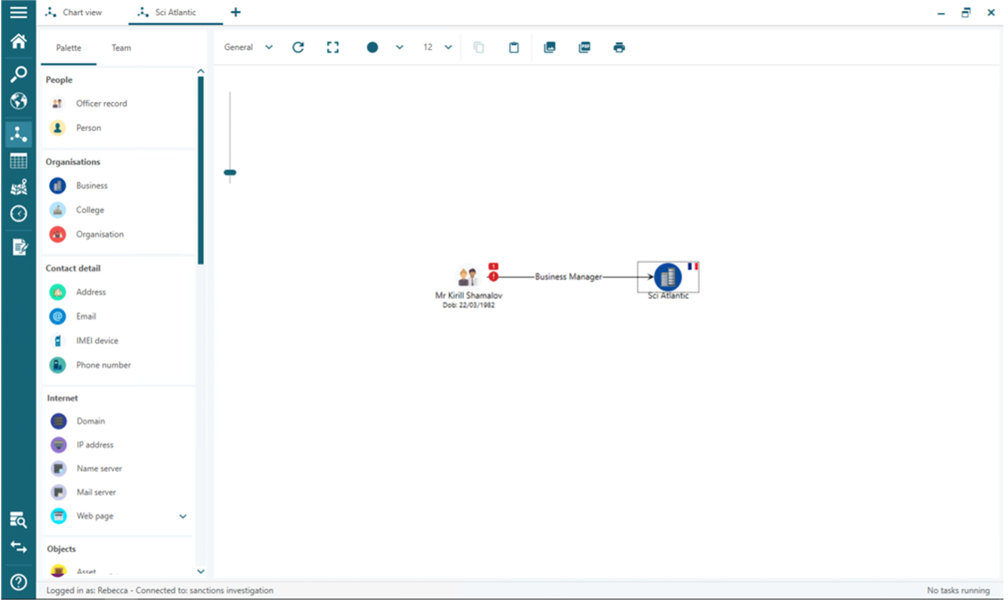 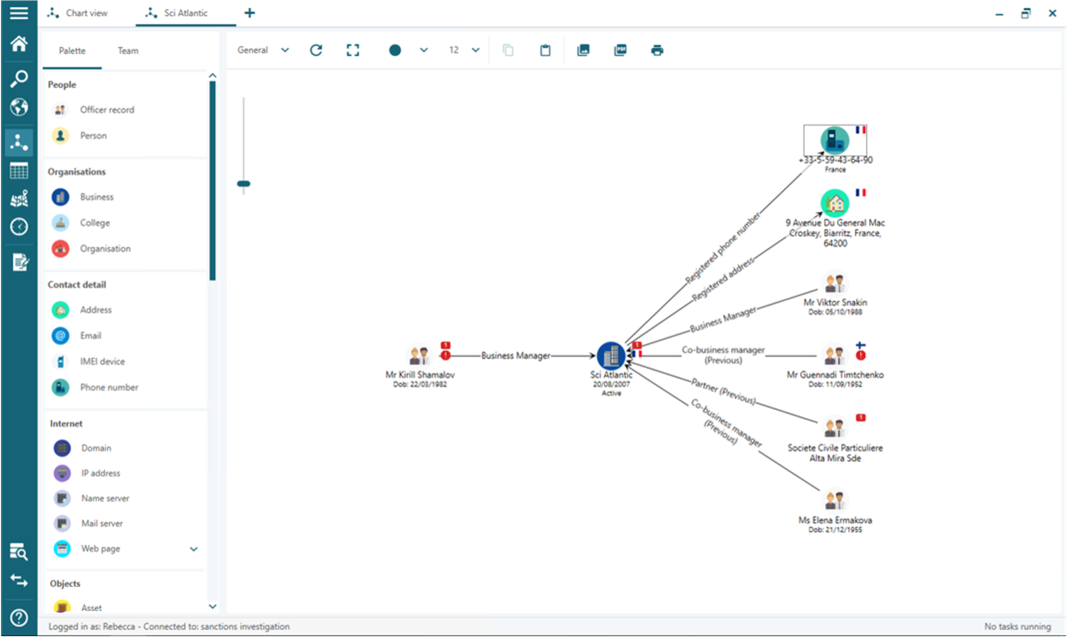 Searching across the whole internet for contextual information

In order to understand more about Sci Atlantic, we can conduct an advanced internet search. Videris searches across live data from a range of search engines and news sources to ensure that key information is not missed.

Here, Videris has identified several news articles that mention Sci Atlantic. Although there are nearly 500 results in total, one result has been prioritised by Videris because it contains known intelligence from our investigation – such as the names of co-directors of Sci Atlantic. This has enabled Videris to identify the most relevant information in a few seconds. 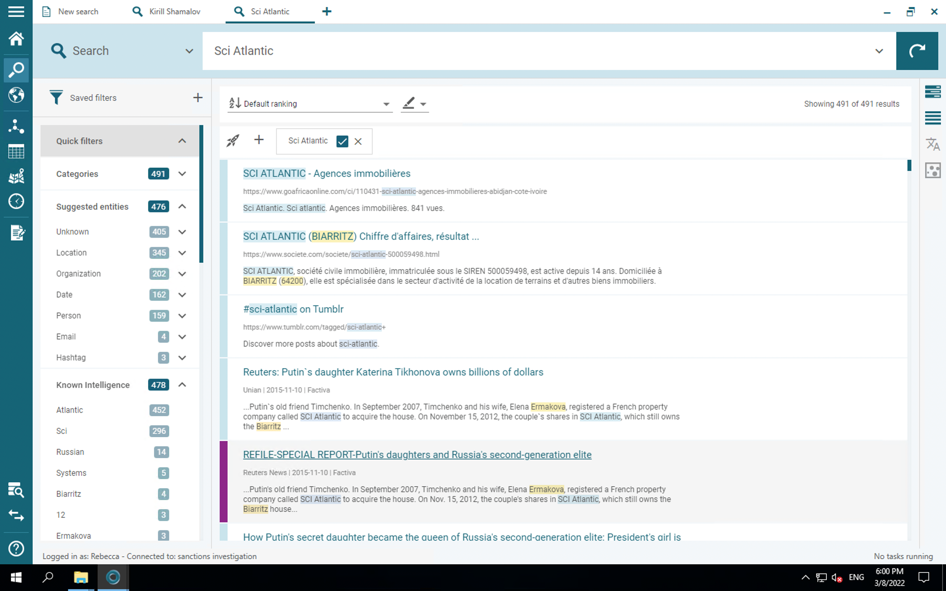 We have identified an article which suggests that Sci Atlantic is the company through which Shamalov owns a valuable property in Biarritz. It also describes previous ‘business managers’ of the company, Gennadiy Timchenko and Elena Emakova, as ‘Putin’s old friend’ and his wife, providing us with further information about connections of Shamalov who might also present a risk of sanctions exposure. 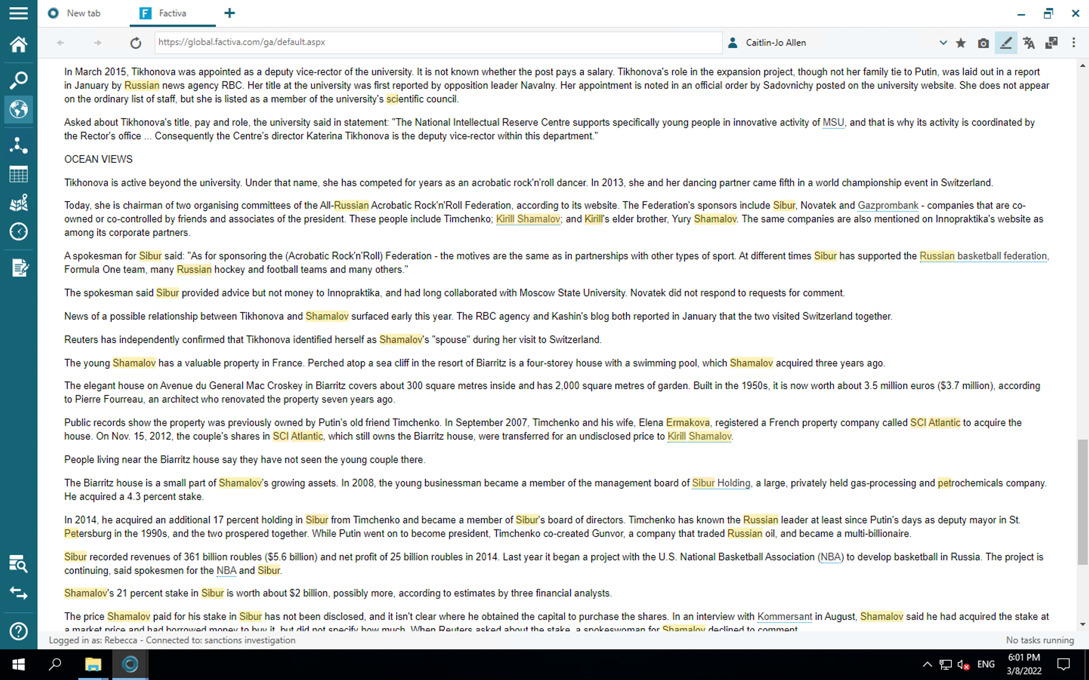 In just a few minutes, we have gained a clear understanding of Kirill Shamalov’s corporate footprint and network. Using this network, we have determined exposure to the sanctioned individual, as well as to individuals sanctioned by association or extension. This enables us to reduce risk quickly and accurately, and facilitates risk-based decisions on any potential connections. To recap, here is what we’ve achieved: